I’m a big fan of Notion. It’s a great piece of software capable of doing countless things — from simple note-taking, habit tracking and Getting Things Done all the way to fully managing the work at a startup. Since May 2021 developers gained access to the beta version of Notion API. It opened up the world of possibilities and already there’re thousands of integrations, for example through Zapier or automate.io.

What we will create# 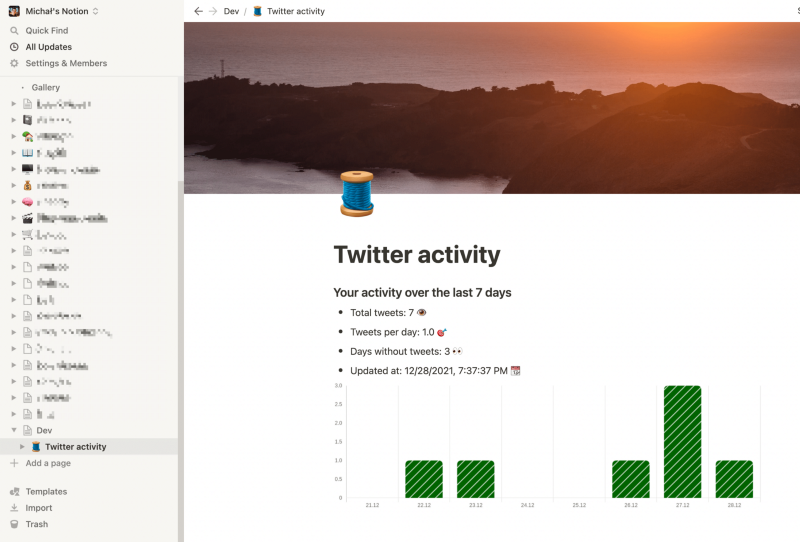 In this tutorial, we’ll use a serverless Typescript Azure Function to periodically get data from the Twitter API (amount of tweets per day) and then put it into a page in Notion through the Notion API. Hopefully, this will be a good starter for anyone who’d like to start using Notion API, serverless functions or both 🚀

Here’s a simple diagram of the solution we’ll create (the visual was made with Cloud Skew, which I really recommend for drawing anything Azure related).

Make sure you have the correct tooling installed, you can find the details in this Microsoft tutorial. After doing that, use the following commands to create the project:

You’ll be asked about the runtime and language — select Node and Typescript. After confirming, the project structure with 1 CRON based function will be created.

Our app will run in Azure’s cloud and before deploying it there, we need to spin up a few resources. It’s possible to do in a few ways, I usually do it with Azure CLI, as it’s way faster than doing it in the Azure Portal, also easy to automate and share. You can find the detailed instructions here (check it out in case of trouble).

Then we need to create a resource group, which is basically a named bag for resources — it’s handy to keep all of the related resources (so apps, storage, analytics etc) in one resource group, as it makes management easier:

Azure Functions projects need to be connected to a Storage account due to triggers, logging and other operations (more details here), that’s why you need to create a new Storage account:

Finally, we can create the Azure Functions app itself. As you see in the parameters below, we’ll go with Node 14, Azure Functions v4 and we’ll use the storage account created before.

Below is the code for the Azure Function which will be executed periodically — check out the full file on GitHub here.

As you can see, it first creates the notion client based on an API token (more on getting it later). Before doing so, make sure to add the official Notion SDK JSpackage:

By default, the function is executed every 5 minutes. This is defined in the function.json file:

Let’s change it, so that it runs every night at 2 AM while we’re asleep (or not — no judgment from my side ✨):

If you’d like to see more examples of scheduling timer Azure Functions, take a look at this great cheatsheet prepared by Armin Reiter.

Preparing the page with Notion API#

As I mentioned already, if the Twitter activity page was created already by the past invocation, we want to reuse it and just populate it with new data from Twitter. To find out if the page is already there, we can use the POST /search API method to look for a page with a given title.

If the page doesn’t exist, we create a new one with the POST /pages method. In the payload, we specify the parent page, the title, icon and cover image.

If the page does exist, we prepare it by removing all of its blocks. We could update them, but this would be a bit more complicated (feel free to try it out!). Before removing the blocks, we first need to get their ids. We can do it by listing all of the blocks for a given page with the GET blocks/block_id/children method. We then remove all of them by calling the DELETE blocks/block_id method for each block.

We’d like to get the number of tweets for a given account per day in the last week. Luckily, Twitter’s API provides a method that does that pretty much out of the box — GET tweets/counts/recent. We call with granularity set to ‘day’ and bingo, we get exactly what we want:

Creating a chart and uploading it to Azure Blob Storage#

To create a chart, I’ve decided to go with QuickChart. It’s a super cool product that allows you to generate charts with simple HTTP GET requests. All of the things like data, labels, chart customisations etc are specified in the URL, so that it looks like this:

The bad news is that we can not use the chart URL above as an image source in Notion, as Notion API requires all of the images to end with an image extension. Because of that, we need to first generate the chart URL, then download it and store it in Azure Blob Storage. The good news is that we don’t have to create these URLs by hand — there’s an npm package called quickchart-js which allows us to configure the chart easily in code. Just add it to the project with:

We then prepare the Blob Storage by creating a container (if it does not exist) and we’re ready to upload the chart as a pngimage. Make sure to install the needed package:

For the sake of keeping things simple, we’ll make the container publicly available, thanks to which the link to the image will not contain a SAS token (learn more about handling these in my other post -> Handling expired Azure Blob Storage links in a user-friendly way).

Populating the paget through Notion API with Twitter data#

We have all of the data prepared, we now have to add it to the Notion page which we’ve prepared before. We’ll do that with the PATCH /blocks/block_id/children method by specifying all of the blocks which we want to add:

See this Notion API documentation page to see the list of currently supported blocks. As you see, we’ve only used the heading, bulleted list items and the image blocks.

Setting up secrets and variables#

As you’ve seen in the code, in a few places we retrieve process env values:

These values will be unique for your project and you’ll need to fill them in before running the whole app. When Azure Functions are running locally, the values come from the local.settings.json file. When the app is deployed to the cloud, the values reside in app’s Configuration. You can manage them in the Azure Portal or do it from the Azure CLI, which again is my preferred method.

You should prepare values for these 6 secrets:

You need to generate it on the Notion website, see my other article which describes it in detail

Name of your storage account, so whatever you’ve replaced STORAGE_ACCOUNT_NAME with a few sections before when creating the account

The key to your storage account, you can easily get it with the command below (copy the value of the “value” field from the response):

We can now upload these secrets to the configuration of your Function App in Azure with the following command:

You need to do it for each of the 6 secrets from the table above. After you’re done, you can use the command below to get all of the configuration values from Azure to your local.settings.json file, which will allow you to test the app locally.

Disclaimer — we’re storing the secrets in the Configuration, as it’s simple enough for the sake of this tutorial. If you’re considering using this code for more serious tasks, I suggest you take a look at Azure Key Vault, which provides more security.

Code is ready, local secrets are in place, finally, we can test the whole solution ✨ Before starting up the app, I advise you to change the schedule of the function, so that it runs every 15 seconds (do it in the function.json file):

Let’s run the app locally with:

If things went as planned, you should see logs similar to these:

Awesome! If you open Notion now, you should see the page with your Twitter activity 🔥

Make sure to revert the change to the execution frequency — we do not want the function to run that often in the cloud.

The deployment is straightforward, as we’ve done all of the hard work (creating resources, setting up secrets) before. Run these 2 commands:

And that’s it, you should see the name of your timer function in the output. Hopefully, when you wake up the next day, you’ll see the Notion page updated 🎉

After you’re done testing things out, make sure to remove the Azure resources. You don’t want to pay for stuff that you don’t really use. You can easily remove the whole resource group with the following command

Let me know if you’d have any issues or questions with integrating Notion, Azure Functions and Twitter together, I’d be happy to help! Feel free to reach out on Twitter: @michal_creates